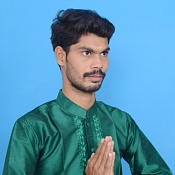 Ask question Make appointment
Vignesh is a hatha yoga teacher who follows the traditional yoga system. He began studying yoga at the age of 9 under the gurukul system (training in residence with a master), which was a traditional practice for Indian families. After his general education, he chose yoga as his profession.

In addition to the knowledge he received from various traditional masters, he received his master's degree in yoga from TNPES University in Tamil Nadu.

He began teaching in 2010 at the Varaha Mystic Yoga Center. Since 2016, he started teaching at the National Yoga Center in Coimbatore.

In addition to his training, he constantly improves his practice, perfectly performs advanced yoga poses. He repeatedly became the winner of various yoga competitions.

His main goal is to spread knowledge about the holistic system of yoga (hatha yoga).

Only the best work in "Kerala" — See yourself!


Other specialists in area "Yoga and Yogatherapy"