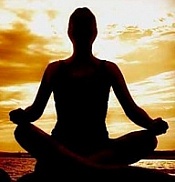 Born in a modest family in Kannur, Naveen grew up to be a very ambitious person and lives a simple life. He started practicing surya namaskar since childhood and that developed his interest in yoga. He started practicing yoga at the age of 18 through his own experiences. He seriously studied various aspects of yoga from his teachers.

Naveen earned a Master of Science in Health and Yoga Therapy and Degree in Yoga with Indian Philosophy. He also attended quite a number of conferences on yoga in Bangalore (2009, 2012), New Delhi (2010) and Kerala (2009) which deepen his knowledge.

Naveen is a group coordinator for yoga demonstrations and meditation trainer at Yoga in Doha. His calm and easygoing nature always create a joyful, positive vibes at his classes. His meditation techniques touch the inner soul and feelings. It radiates a powerful energy in which you want to experience more and more.

He is also an expert in Hatha Yoga and Asthanga Yoga Vinyasa. Yoga is his passion and he considers it as his life and soul. It is a means to healthy, dynamic and successful living in this society.


Only the best work in "Kerala" — See yourself!

Other specialists in area "Yoga and Yogatherapy"